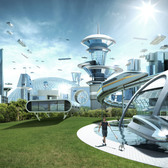 A newsletter about life among the machines. Written by a human, sent on Sundays.